View the preview or purchase the book.

Watch our videos that tell the history of Opals.

How to tell the difference between each opal variety. 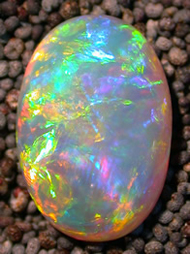 Throughout history opal has been regarded as the stone of good fortune.

Late in the 19th and early in the 20th century however, most probably for commercial reasons, there was a proliferation of damaging reports that opal was an unlucky stone. These were based upon a misinterpretation.

There can be little doubt that much of the modern superstition regarding the supposed unlucky quality of the opal owes its origin to a mis-reading of Sir Walter Scott’s novel “Anne of Geierstein”.

"The wonderful tale…contains nothing to indicate that Scott really meant to represent opal as unlucky.” (The Curios Lore of Precious Stones, by George F. Kunz, 1913)

In Roman times the gem was carried as a good luck charm or talisman, as it was believed that an opal brought its owner good fortune.

Today, in a number of cultures, opal is carried or worn as a good luck charm. Lucky opal, the rainbow gem, the stone of hope, the birthstone of October.